skip to main | skip to sidebar

"Star Wars"-themed parody of Queen's "Bohemian Rhapsody". This video is composed of 100% WIN.

I imagine it would have been difficult enough for the celebrity panel of the game show "What's My Line" to guess the occupation of the guests based upon "yes" or "no" answers to a few questions, but what if the guest was an individual with a highly varied and idiosyncratic resume?

Wonder no more...via Roger Ebert's excellent blog, a snippet from the 1950's era show with none other than Salvador Dali as the guest. Amazingly, the panel manages to guess correctly based on what can't be anything more than an intuitive leap. Appropriately surreal, to say the least...

HT: Roger Ebert (via Twitter)
Posted by Bill Snedden at 16:00 No comments:

Humanity in the midst of horror

I can't embed it, but this video of a 90-year-old WWII veteran recounting an experience from his time shortly after the D-day invasion is both incredible and a wonderful example of the power of our shared human values in the face of despair and loss. Please take a moment to give it a look; you won't regret it.

Oh, please note that the video will start playing when the page has loaded. Completely SFW, but it might start up a tad loud...
Posted by Bill Snedden at 14:58 No comments:

Email ThisBlogThis!Share to TwitterShare to FacebookShare to Pinterest
Labels: Miscellaneous

HT: Patton Oswalt
Posted by Bill Snedden at 09:35 No comments:

One of Steven Wright's one liners: "I got this powdered water - now I don't know what to add". Hahaha....Wait, what?

Scientists have developed what they're calling "dry water", a powder that contains a drop of water surrounded by a silica compound.


Scientists believe dry water could be used to combat global warming by soaking up and trapping the greenhouse gas carbon dioxide. Tests show that it is more than three times better at absorbing carbon dioxide as ordinary water. Dry water may also prove useful for storing methane and expanding the energy source potential of the natural gas.

"Powdered water" is something I certainly never thought I'd see. But we still don't know what to add...

HT: Derren Brown
Posted by Bill Snedden at 09:12 No comments:

Watch this and weep; weep for the children and our collective future...

Neil Tyson (director of the Hayden planetarium) is one of most eloquent and passionate advocates for science and science education we have today. In this brief answer to an audience question, he gives the best rationale I've yet heard for why continued funding for NASA is so vitally important.

Posted by Bill Snedden at 18:42 No comments:

Email ThisBlogThis!Share to TwitterShare to FacebookShare to Pinterest
Labels: Science

Thought for the day... 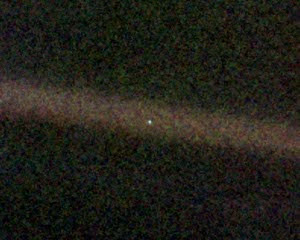 "The spacecraft was a long way from home.

I thought it would be a good idea, just after Saturn, to have them take one last glance homeward. From Saturn, the Earth would appear too small for Voyager to make out any detail. Our planet would be just a point of light, a lonely pixel hardly distinguishable from the other points of light Voyager would see: nearby planets, far off suns. But precisely because of the obscurity of our world thus revealed, such a picture might be worth having.

It had been well understood by the scientists and philosophers of classical antiquity that the Earth was a mere point in a vast, encompassing cosmos—but no one had ever seen it as such. Here was our first chance, and perhaps also our last for decades to come.

So, here they are: a mosaic of squares laid down on top of the planets in a background smattering of more distant stars. Because of the reflection of sunlight off the spacecraft, the Earth seems to be sitting in a beam of light, as if there were some special significance to this small world; but it's just an accident of geometry and optics. There is no sign of humans in this picture: not our reworking of the Earth's surface; not our machines; not ourselves. From this vantage point, our obsession with nationalisms is nowhere in evidence. We are too small. On the scale of worlds, humans are inconsequential: a thin film of life on an obscure and solitary lump of rock and metal.

Consider again that dot. That's here. That's home. That's us. On it, everyone you love, everyone you know, everyone you've ever heard of, every human being who ever was lived out their lives. The aggregate of all our joys and sufferings; thousands of confident religions, ideologies and economic doctrines; every hunter and forager; every hero and coward; every creator and destroyer of civilizations; every king and peasant, every young couple in love; every mother and father; hopeful child; inventor and explorer; every teacher of morals; every corrupt politician; every supreme leader; every superstar; every saint and sinner in the history of our species, lived there—on a mote of dust suspended in a sunbeam.

The Earth is a very small stage in a vast cosmic arena.

Think of the endless cruelties visited by the inhabitants of one corner of this pixel on the scarcely distinguishable inhabitants of some other corner. How frequent their misunderstandings; how eager they are to kill one another; how fervent their hatreds. Think of the rivers of blood spilled by all those generals and emperors so that in glory and triumph they could become the momentary masters of a fraction of a dot. Our posturings, our imagined self-importance, the delusion that we have some privileged position in the universe, are challenged by this point of pale light.

Our planet is a lonely speck in the great enveloping cosmic dark. In our obscurity—in all this vastness—there is no hint that help will come from elsewhere to save us from ourselves. Like it or not, for the moment, the Earth is where we make our stand.

It has been said that astronomy is a humbling and character-building experience. There is perhaps no better demonstration of the folly of human conceits than this distant image of our tiny world. It underscores our responsibility to deal more kindly with one another, and to preserve and cherish the only home we've ever known.

An excerpt from Carl Sagan's Pale Blue Dot: A Vision of the Human Future in Space. He's referring to a photo of the same name, Pale Blue Dot (a portion of which is posted above), taken by Voyager I on February 14, 1990.

via Gizmodo
Posted by Bill Snedden at 11:06 No comments:

Bill Snedden
I was born and am still alive, residing in the great state of North Carolina. I sustain my body through gainful employment and my mind through reading and writing. Motto: Omnia Mutantur, Nihil Interit -- Ovid

All opinions expressed here are my own. No ideas were harmed in the creation of this blog.

This work is licensed under a Creative Commons License.